There is that familiar upbeat hum playing in your head, you know how it goes, but you are not sure what the name is.

Dancers clad in bright red, white, and crisp green outfits to match the powerful trifecta that represents her flag, whilst merrily playing the tambourine to the beat of the song.

It is none other than the lively Italian Folk Song called Tarantella Napoletana. Viva I’Italia!

The History of Tarantella

Ciao!  Deeply rooted in the culture-rich streets of Italy is the multi-faceted folk dance called Tarantella. Modern times today associate it with a dance portraying happiness, mostly at weddings and other Italian type festivals.

However, through the centuries the Tarantella developed from a much shadier place and was oddly even used as a cure. Yes, read that again!

The birthplace of the name of this dance is in the Puglia region in “Italy’s boot” in the Southern part of the country. In a small town called Taranto, this dance is also commonly known amongst locals as the “dance of the spider”.

The reason for this is due to the Wolf Spiders that are found in the town. Hence the term tarantola (tarantula) was coined. It was believed that the bite from this venomous spider was highly toxic and subsequently called tarantism.

During the 15th to 17th centuries, the spider bites were rife apparently. Sadly women of lower social status, such as the peasants, appeared to form the majority of the victims, and they were called the tarantata. This is due to the fact that in those days the townswomen were the ones that had to work in the fields. The female victim would enter a state, resembling a fit which caused extreme restlessness.

Other symptoms associated with the spider bites where blurry vision, fainting spells, and controllable tremors and shaking.

The only available anti-venom known at the time was for the victim to be surrounded by the townsfolk people. The cantautori (musicians) would strum along with instruments such as guitars, tambourines, and mandolins. The pace and beats will differ until the cantautori felt that they have reached the rhythm that would heal the tarantata.

The tarantata victim will then continue with this tempo until they have perspired out the poison left by the Wolf Spider.

How to Dance Tarantella

Throughout the ages, it has evolved from an anti-venom for the poison of the Wolf Spider, to dance of flirtation and celebration.

The folk dance is now practiced by two pairs, comprising of one man and one woman each. The female counterparts are known to be shaking the tambourine, whilst dancing. The steps are executed in 6/8 time at an upbeat pace, all the qualities we have come to know and appreciate about it.

The steps and movements of the dance are identified as swift and lively. It is said that the partners are teasing each other in a flirtatious manner. Bellisima!

The brisk, sweet movements of the female counterpart, together with the intoxicating beat of the tambourine is said to be causing much excitement in her male counterpart. The male counterpart’s role is to lure his partner into succumbing to his charms, tender moves and the quickness of his feet on display. How romantic is that?

The dance starts off with an 8-count and is broken down into three parts: 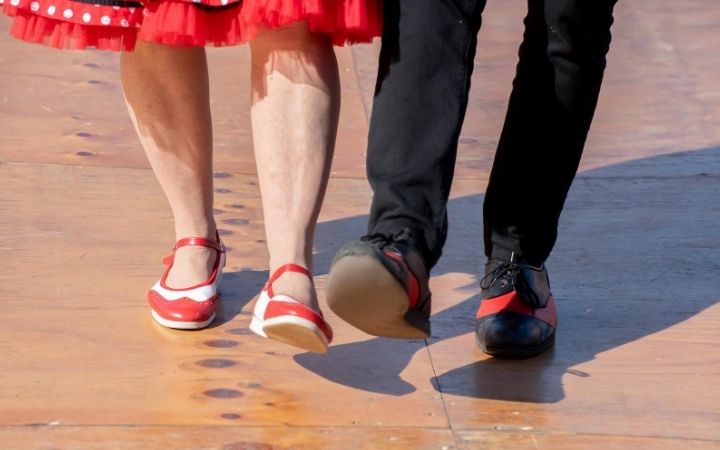 It is believed that you never, ever dance the Tarantella alone, or with two persons of the same gender…it is said to be bad luck! After all, you would not want to be banished to the middle of the town having to exhaust yourself doing a cardio workout to rid your system of the venom? Addio!