“Cento di questi giorni” means “ May you have a hundred of these days.” It is a famous Italian blessing when you want to make a toast.

Besides being famous as wine lovers, Italians are fashionable for their traditional drink known as anisette. Having so many family reunions, feasts, and parties, they like to make a toast with one sip of anisette.

Contents show
1 What is Anisette?
2 History Of Anisette
3 Anise & The Animals
4 How Do You Drink Anisette?
5 Anisette Recipe
6 Anisette vs. Sambuca
7 Takeaway

Anisette is a famous Italian liqueur, more precisely, an anise-flavored liqueur that people consume in most Mediterranean countries.

It originates from France but is also prevalent in Italy, Spain, Portugal, Lebanon, Turkey, Greece, Israel, and Cyprus. Different countries have different versions. Spain has anis, Turkey has raki, Greece has ouzo, and France has pastis.

It consists of anise seeds, and is generally sweet with a flavor similar to black licorice, and has a lower alcohol percentage than many other liqueurs.

As an example, Greek ouzo, the minimum allowed is 37,5 percent while in anisette is 25 percent.

Anisette is one of the oldest anise-flavored liqueurs, among which is Absinthe, a green spirit that has been banned in a lot of counties for years.

Some of the manufacturers use the seeds of star anise rather than real anise seed. They do that because it is less expensive.

Anisette is distinctive because it is one of the first commercially produced liqueurs, dating back in 1755 with the Marie Brizard spirit company.

Throughout the centuries, anise has been used for a variety of purposes; this includes cure epilepsy, or to ease a sore throat, especially if you have problems with coughing and bronchitis. Some people believed that if you put anise under your pillow,  you wouldn’t have nightmares.

In Biblical times, anise was valuable because people used it as a form of offerings and payment of taxes in Palestine. Some scholars think that the word anise is a translation of Mathew XXIII 23, which refers to “dill” in the original Greek.

They recommended it for curing headaches, cancerous growth in nasal passages, and to relieve digestive upsets. The greatest mathematician, Pythagoras, was the first one who discovered that anise would prevent stomach pain.

Anise was also a cure for kidney problems, to induce sleeping, even assisted during childbirth, to increase milk flow and colostrum production in nursing mothers.

The Romans said that they had eaten spiced cake with anise to avoid indigestion after a large portion of the meal.  In the 1800s, Germans believed in the medicinal value of anise and even flavored their household bread with anise.

In one book for beekeeping, the author said that anise oil is the best way to attract bees when there are no flowers to be found.

In the vet laboratory, anise is a useful component that vets use to treat various intestinal issues in animals.

How Do You Drink Anisette?

Drinking coffee with a sip of anisette is a fantastic combination. You cannot resist that flavor over and over again.

Apart from adding delicious flavor to the coffee, with anisette, we can make many other cocktails, such as Queen Mary, Queen Bee, Sol y Sombra, Spina Nera.

Three classic cocktails have anisette in a mixture of their ingredients. Those cocktails are  The French Mule, The Marie Mojito, and The Marie Julep.

Anise liqueur is one of the homemade liqueurs that people make by themselves. If you want to make one at home, here is the recipe: 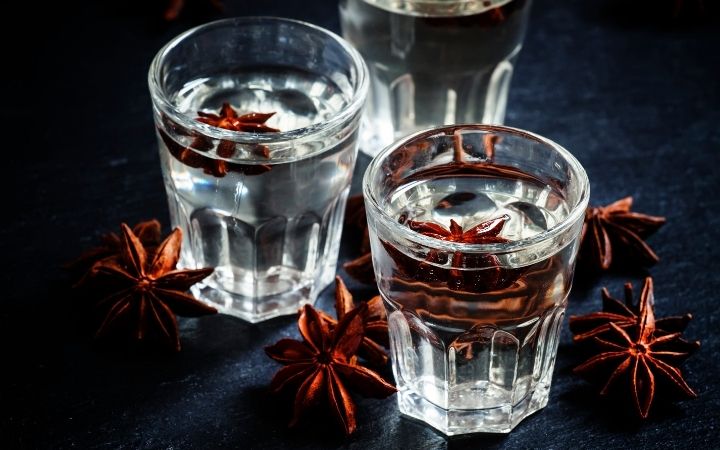 People confuse anisette with sambuca, which is another very clear liqueur. Both of them are popular and are usually served after dinner.

The main difference is that anisette is a French liqueur made with anise seeds. People mix it with water, and it turns milky white.

Sambuca is an Italian liqueur made of star anise blended with elderflower and licorice and served with three beans of coffee.

The Italian version of anisette is sambuca. The word sambuca comes from the Latin word Sambucus – meaning elderberry or elderflower.

There are two kinds of sambuca, namely white and black. In 1800 was the first commercially available sambuca sold by Luigi Manzi, in Italy.

Today if you order sambuca in a bar, they will serve it with three coffee beans inside. The three beans represent health, happiness, and prosperity.

If you go to Italy, take a chance to try this delicious flavor of liqueur mixed with coffee beans.

It would be perfect if you could be part of some Italian party or even join in celebrating anisette day. There you will taste different cocktails made of anise.